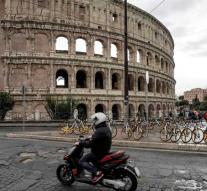 rotterdam - The hassle around the Italian budget brings the country into major problems. Credit rating agency Moody's has lowered the rating for Italy to Baa3. One more step down, and the country has a 'mess status'.

Moody's bases the relegation on the Italian government's decision to increase the budget deficit faster than agreed with the European Union. The national debt of the country, which is already among the highest in the EU, is also going down even further, the credit rating agency expects.

In order to bring down the national debt, Italy needs economic growth. It will be there, but is short-lived, Moody's thinks. After that, growth will return to 1% per year.

Moody's keeps the prospect for the assessment stable.