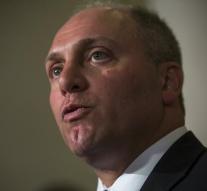 washington - The situation of Republican Congressman Steve Scalise is still critical but improved in the last 36 hours. 'That's encouraging,' said the surgeon who operated him on Friday. Scalise was shot this week during a baseball training by a 66-year-old man, presumably a Trump hater. The perpetrator died of a police bullet.

The attending physician said that the politician, who was severely injured on the left hip, 'has to stay in hospital for quite some time. 'Scalise, who lost a lot of blood because internal organs were affected, will have to undergo some operations, but he is expected to run again and run again. The chances of being completely recovered are real according to the doctor.

Scalise practiced Wednesday with party fellow members for the annual charity contest against Democrats in Washington Nationals stadium. Many members of the Congress carried special headgear in honor of Scalise on Thursday evening during the baseball duel.