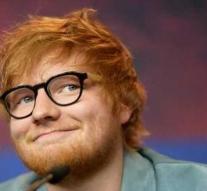 dusseldorf - The stopped concert by the British superstar Ed Sheeran moves to Gelsenkirchen. The organizer FKP Scorpio reported that on Wednesday evening.

Earlier in the day, the city council of Düsseldorf had not given permission for an open-air concert by Ed Sheeran. For his performance in the car park of the trade fair, 104 trees would have to be cut down to make room for the stage.