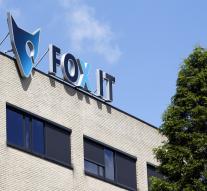 delft - Fox-IT, one of the largest computer security companies in the Netherlands, is taken over by his British listed company NCC Group. The British put there more than 133 million euros on the table, more than four times the turnover of the Dutch company.

The parties see the deal as an opportunity to grow faster. Fox-IT has existed since 1999. The Delft-based company has about 220 security experts and collaborates with partners in more than twenty countries. Net profit last year amounted to 1 million euros. Fox-IT will continue to operate under its own name and be led by the current management, it was announced on Tuesday. NCC has more than 1500 employees.

There has recently been much demand for computer security offerings of both companies. " Because of the complementary expertise and international strength of NCC Group, we are able to make our investment in innovative solutions to grow, and we can offer our current and future customers and partners even better service ", says Menno van der Marel, Director and co-founder of Fox-IT.

Who significantly benefit from the deal are the founders of Fox-IT, Van der Marel and Ronald Prins. Even former KPN CEO Ad Scheepbouwer invested in Fox-IT. They each account for a third of the shares and now ironing so many millions.