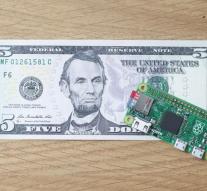 - A little computer easily cost several hundred euros, but it can also be a lot less. The makers of the already cheap Raspberry Pi computer now have an ultra-cheap new PC: the Raspberry Pi Zero. Cost : only € 5.

The P Zero is a simple computer with a 1 GHz ARM processor. This type of chip is also used in smartphones because they consume little power. There is 512MB of RAM and an opening for a microSD memory card for storage. The device can be connected to a monitor or TV via an HDMI cable. The computer is delivered as "naked" PC board with the above components mounted on it. There are several online shops who also casings deliver it. Like its bigger brothers Raspberry Pi computer is meant for hobbyists who want to start making hardware or extensions for the device. Nevertheless, anyone can purchase one to use for example as a media PC, though buyers should know how to get this running an operating system. The Raspberry Pi Zero is produced in Britain and in several British online shops for sale for £ 4.
NEW