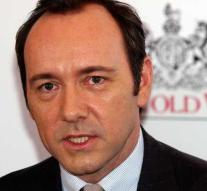 - Justice in Los Angeles is investigating the case against Kevin Spacey for sexual assault and sexual abuse. The police have completed the investigation and hand over the case to the Los Angeles Public Prosecutor dealing with sexual offenses, Variety and TMZ report.

According to TMZ sources, the police presents all cases against Kevin Spacey about sexual abuse that have come in, even if things clearly do not lead to prosecution. This may be the case, for example, with a case in the nineties, which is barred.

Kevin Spacey has been accused of sexual misconduct by countless men in the United States and England. The London police are investigating at least three declarations against the Oscar-winning actor. He was fired by Netflix in his own successful series House of Cards and all his scenes as protagonists in the movie All the Money in the World were re-recorded with Christopher Plumber as his replacement.