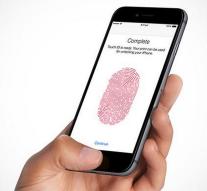 - On the Apple forum users complain a number of users on the proper operation of the TouchID fingerprint sensor on the iPhone after a software update. After iOS 9.1 installed, the sensor turns slowly or not working more for these people.

The complaints seem to come mainly for owners of an iPhone 6 or 6S. Restarting the phone sometimes turns to solve the problem temporarily, but after a day it's back to the old.

Unfortunately for these people, it is not possible to reinstall an older version of iOS, so they will have to wait for a patch from Apple. The company has not yet responded to the complaints.