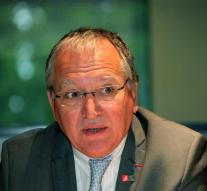 rijswijk - The European Patent Office (EPO) in Rijswijk is again involved because of problems in the workplace. Two trade unions of the international organization, where a large number of employees committed suicide in 2014, filed a complaint against the Netherlands. The reason: violation of the right of access to justice.

The EPO, where several thousands of people work, have been in the process of a culture of intimidation from management, with the result that the work environment within the organization has been severely affected. 'In addition, the board of directors makes it impossible for unions to effectively protect the interests of their members,' says lawyer Liesbeth Zegveld. 'Although an organization like the Patent Office, under normal circumstances, enjoys immunity from jurisdiction, it does not apply if there are no effective remedies for trade unions to address the problems. According to settled case-law of the European Court, a national court can accept jurisdiction in that case. '

Zegveld filed a complaint with the European Court of Human Rights on Tuesday. 'The Netherlands is obliged as a treaty to ensure that the European Convention is ensured in its territory. Instead, human rights violations are covered. '

Today, the House of Representatives is debating the issue with the Patent Office.

The organization has been steered for years by the French despot Benoît Battistelli. State Secretary Van Dam (Economic Affairs) said at the end of last year's finger at the patent office.