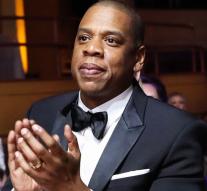 - "Streaming music provider Tidal, which was acquired in 2015 by rapper Jay-Z, recorded in 2015 a net loss of 25 million euros. This is apparent from documents in the hands of The Wall Street Journal."

"The loss increased by 15 million euros compared to 2014, while turnover with only 30 percent to 42 million euros. According to the business newspaper stands by Jay-Z, the company expects a difficult time."