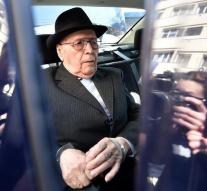 bucharest - The Romanian Supreme Court Wednesday notorious camp commander from the communist era sentenced to twenty years in prison for murder and crimes against humanity.

Also appeal court considered Ion Ficior, which is Monday 89, responsible for the deaths of 103 people who were exiled to the work of Periprava colony in the Danube Delta.

Ficior was, according to the court during the period 1958-1963 primarily responsible for the horrific treatment of political prisoners incarcerated in the camp. They were beaten, starved and had to make do without heating and medical care. In addition, detainees long days in the cornfields made while she barely got something to drink.

' I myself by pulling guards forced grass from the ground with my teeth, '' said a witness who could recount the terror. According to the institute for research into communist crimes have become some two million Romanians between 1945 and 1989 in some way victims of the dictatorship. The lawsuit against Ficior was the second of its kind since the fall of Nicolae Ceausescu.