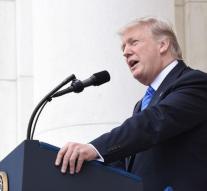 washington - The communications head of the White House has announced that after three months. That reported US media. The 47-year-old Mike Dubke had already filed his resignation on 18 May, but reportedly still working on his job.

Dubke, according to ABC News, previously suggested to stay until the end of the first foreign trip of President Donald Trump. That trip is in the meanwhile, but Dubke would still be in his post. According to The Washington Post, Tuesday may be his last working day.

The communications manager worked, among other things, on the government communication strategy. He did that work especially behind the scenes.