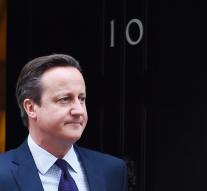 london - No less than 157 members of the House of Commons Wednesday have signed up to speak during the debate on air strikes on ISIS in Syria. Prime Minister David Cameron Tuesday already got the unanimous support of his cabinet and in parliament that a majority draw.

Due to the many speakers, the vote is likely held until midnight. Research by the BBC shows that of the 640 lower house members who will vote, 362 for the respective motion will vote and 175 against. The remainder is "likely to " or blank, according to the broadcaster.

Britain has been conducting attacks against Islamic State in Iraq, but the prime minister finds that the ISIS racking to be in Syria goal. He does not want the British benefit from the attacks of other nations, but must deliver their part in the battle.