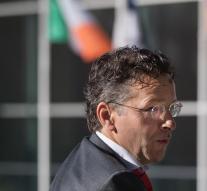 the hague - Eurogroup President and Deputy Minister of Finance Jeroen Dijsselbloem believes that the European Commission should explain why 'many billions of Italian banks are allowed to stop'.

The Italian government draws a total of 17 billion euros for the rescue of the emergency banks Banca Popolare di Vicenza and Veneto Banca. As they are small banks, they do not fall under the European rules for system banks, says Dijsselbloem.

According to him, there is no question in the European Banking Union rules. 'They are simply pushed into Italian bankruptcy law. '

But the two receive some form of state aid, also calls for questions at Dijsselbloem. 'That will have to explain to the Commission. '