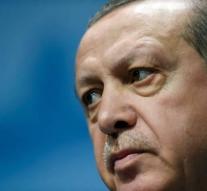 istanbul - The commemorations of the failed attempted coup last year in Turkey began throughout the country on Tuesday. President Recep Tayyip Erdogan and Prime Minister Binali Yildirim visited Istanbul's Martelar Cemetery on Tuesday, where fifteen of the victims were killed.

The coup attempt was carried out by soldiers and began on July 15, 2016. It led to massive resistance among the population, but missed sufficient support among soldiers and police. The next day it was clear that the coup failed. There were more than 240 deaths and nearly 2,200 injured. It is still unclear who and with what motives the bloody coup attempt has dared.

Erdogan is an old political rival, Fethullah Gülen, as the brain behind the coup attempt. Gülen certainly denies that.