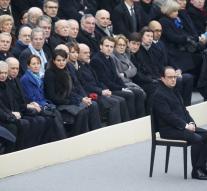 - At the Dome des Invalides in Paris is Friday the national commemoration launched for the 130 victims of the terrorist attacks of two weeks ago. At the ceremony, which takes almost an hour, just coming French President François Hollande speaking.