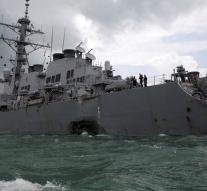 singapore - The collision between the American torpedo boat hunter and an oil tanker in August near Singapore could have been avoided. That made the American Navy known.

The commander and his first replacement of the USS John S. McCain have been transferred because of a 'break in trust'. According to the statement by the navy, bad judgments have been shown and poor leadership shown. Although the investigation is still ongoing, it is beyond doubt that the accident could have been prevented, is stated in the statement.

In the accident, ten navy men died and injured five people. It was the fourth collision of a US warship in the Pacific this year. For example, in June the USS Fitzgerald collided with a Filipino container ship. As a result, seven people died.