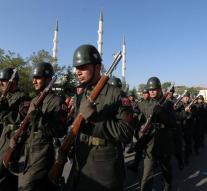 ankara - Leaders of the Turkish army top brass are in the attempted coup of last Friday and Saturday overpowered by secretaries and bodyguards. The highest military instance, Chief of Staff General Hulusa Akdar was threatened with gun drawn by his secretary in an attempt to force him to sign a statement of the coup plotters and read out, said sources from the Turkish newspaper Hürriyet.

Akdar refused any cooperation. Many commanders of elements of the armed forces have been threatened or kidnapped by their secretaries or other close associates Friday.

The Vice President of the Turkish General Staff, General Yaşar Güler, was captured by his bodyguards or aides. That also happened to Air Force Commander General Abidin Ünal Friday when he was attending a wedding.