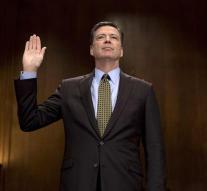 washington - Former head of the FBI James Comey told Friday (local time) that he will testify on 29 May at the public hearings of the Senate Commission investigating alleged Russian interference with last year's US presidential elections.

Comey was fired last week by President Donald Trump. The president would have put Comey under pressure to stop investigating Russian interference but Trump denies that. Earlier Friday, Trump Comey left out for 'Nut Job', which means something like mafkees.

The Senate is not the only institute doing research on this subject. Former FBI director Robert Mueller has been appointed by the Ministry of Justice as a special prosecutor who is conducting a criminal investigation into the possible interference of Russia in the presidential elections.