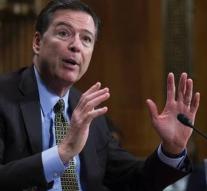 Comey was dismissed on Tuesday by US President Donald Trump. Officially because of the way he was confronted with the inquiry into the private mail server of former Foreign Secretary Hillary Clinton. Democrats say, however, that Comey had to clear the field because he had come too close to Trump with his research on Trump's ties with Russia.

'It's over and it's ok,' says Comey. 'I've told you before, in times of trouble, the American people must see the FBI as a rock in the fire. '