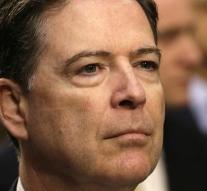 washington - Former FBI Director James Comey does not doubt Russia has interfered with US presidential elections. He added that President Donald Trump did not directly ask him to stop Russia's investigation.

The Ministry of Justice also would not have put pressure to put an end to the investigation into Russian interference in the ballot box, the former head of federal investigation said during a hearing before the Senate Intelligence Commission.