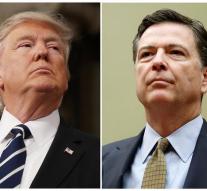 washington - A few days before his resignation as an FBI director, James Comey has still asked for extra money and employees to investigate the possible Russian interference in the US presidential elections of 2016. The New York Times reports Wednesday that Comey, with this request to the ministry of Justice had targeted.

Three officials who would have been informed of the request told The New York Times that Comey had raised his request for additional funds from the Minister of Justice, Rod Rosenstein.

It was precisely Rosenstein who announced Tuesday that Comey's dismissal was related to the way Comey was confronted with the investigation of the e-mail of former Secretary of State Hillary Clinton. Rosenstein stated in a memorandum that, according to him, Comey should not have disclosed that Clinton had to be prosecuted for him.