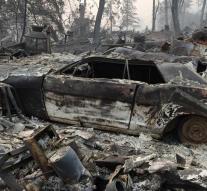 paradise - It will take until the end of November before the immense forest fire in California is under control. That has been announced by the California state service for forestry and fire protection.

The fire, which is called Camp Fire, broke out on 8 November and has since cost the lives of 77 people. 'This is unprecedented. This has never happened to anyone. A fire that is so devastating and has claimed so many lives, 'said Sheriff Kory Honea of ​​Butte Country.