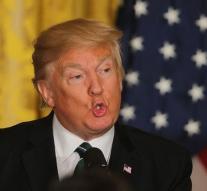 paris/berlin - The world does not make sense in the battle against global warming. Germany and France emerged as European leaders in this endeavor. They demonstrated their determination on Friday shortly after US President Trump terminated the Paris Convention.

German Chancellor Merkel has emphasized that Trumps decision does not interfere with the fight against climate change. With the climate treaty that was embraced in almost all of the world by 2015 in Paris, we must 'keep the creation and nothing can stop us,' Merkel said.

In the whole world, indignantly responded to Trump's decision. Minister Koenders (Foreign Affairs) called it a cardinal error and harmful to all. The new French president Macron expressed his dissatisfaction in English and shouted, 'Make our planet great again.' The call refers to Trumps Leuze Make America Great Again! Macron invited US environmental scientists to work in France.

The international organization of meteorologists WMO suggested Friday that the Earth might end up at 0.3 degrees warmer at the end of this century than thought first as a result of Trumps decision.

Trump hammered his decision on the assertion that the US is the victim to international agreements. According to him, the economy of his country is adversely affected by free trade treaties and the climate treaty. But what his decision means in practice is vague.

The climate treaty mainly consists of intentions and not obligations and rights such as a free trade treaty. Meanwhile, many US companies have shareholders who demand clean and sustainable work. That is often more lucrative as well. And in many states and municipalities, legislation has been introduced for a long time, which reduces greenhouse gas emissions.