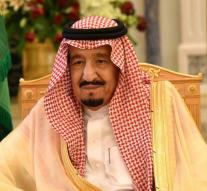 dubai - King Salman bin Abdulaziz of Saudi Arabia ordered the resignation of an overthousiastic columnist at a newspaper in that country. The 81-year-old frost was not served to be compared to the writer of the article with Allah.

In the country where the press is strictly tied, the newspapers usually diverge across the heads of the head of state and his mighty family. But Ramadan al-Anzi's promising column in the newspaper al-Jazirah fell totally wrong with the frost.

It is not common in the strict Islamic country to compare people to Allah. There are 99 synonyms in the Arabic language for the word Allah. Al-Anzi had used two of those words in his column in relation to the king. Whether further action has been taken against the journalist and his newspaper is not known. The newspaper has offered its apologies.