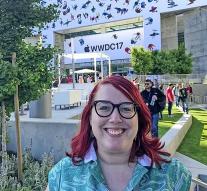 - Now it's really serious: the new battle in the tech war revolves around the smart speaker. Why? Apple announced its first Siri speaker this week, the HomePod.

The HomePod will be able to answer questions about podcasts, news, stocks, weather and sports. Apple's announcement again accompanied the necessary spectacle. It all happened in San José during WWDC, a developer conference of the company where app makers meet to get new technologies on new gadgets and operating systems.

What do you get? A hall of hundreds of people who get used to a new file system for a tablet. But also the Apple people can do something about it. While waiting for the presentation, it was continuously jamed and flapped for the visitors. There we are Dutch too something sober.

Incidentally, the press- including the undersigned- was placed in the back of the room. Fortunately, they had hung an additional screen, otherwise Apple topman Tim Cook would have been no more than a dot.

As a cherry on the cake, afterwards I could see and touch the shining new goodies behind the scenes. Unfortunately, that was not true for the HomePod, we only had to make pictures. And busy it was there... It just happened... Everyone for themselves!