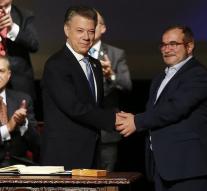 bogota - The Colombian Congress on Wednesday (local time) approved the new peace agreement with rebel group FARC. A week ago, the Colombian president Juan Manuel Santos and Rodrigo Londono behalf of the FARC put their signatures under the revised peace agreement to put an end to 52 years of war.

The agreement Wednesday with 130-0 was approved in parliament, after a day earlier was adopted 75-0 in the Senate. Members of the Democratic Centre party of former president and current opposition leader Alvaro Uribe hall immediately before leaving the protest vote. According to Uribe, the treaty still too mild for the insurgents.

An earlier version of the peace agreement was unexpectedly rejected by the people in a referendum. With the ratification begins a stretch of six months in which 7,000 combatants lay down their arms and the FARC transforms to a political party.

The conservative part of the Colombian population, by Uribe, but Santos is upset that the new agreement has not been submitted to the people, but only to the Congress. President Santos, who was awarded the Nobel Peace Prize in October, wants the treaty comes into force as quickly as possible, so as not to jeopardize the fragile ceasefire.

' Let's not forget what we are doing here today. We try to put an end to a war that lasted for more than fifty years, 'said government negotiator Sergio Jaramillo. At the peace treaty was four years of negotiations in advance in Cuba.