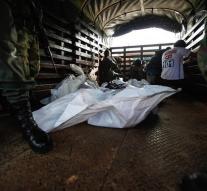 bogota - Despite the peace agreement between the Colombian government and the leftist guerrilla organization FARC holds the smaller ELN rebel group attached to the armed struggle.

The organization respects the content of the agreement, but which will not, wrote ELN commander Nicolás Rodríguez alias 'Gabino' in a Monday made public a letter to the FARC. However, he wished the FARC success in his intention henceforth be used as a political movement for his goals.

After four years to negotiate the government and the FARC were last week agreed on peace. With the ELN wants the government begin formal negotiations only if the group all hostages he lets go of his hand. On the Marxist-Leninist refounded National Liberation Army (ELN) has approximately 2000 fighters. The ELN holds regular attacks on the infrastructure of the South American country.