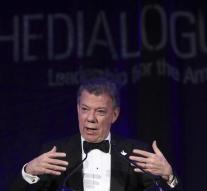 bogota - The Colombian army on Wednesday killed two rebels from FARC. In the fight with the guerrillas in the northern Bolivar province was also captured a man.

The government earlier signed a peace agreement with the FARC. President Juan Manuel Santos earned him the Nobel Peace Prize, although the population has rejected the agreement because the rebels too easily would come off. Both parties last weekend came to a new agreement, but that has yet to be approved.

Until the rebels are disarmed, it was agreed that they remain in designated areas. According to the army were shot dead rebels extorting people in a region 68 kilometers from the designated area and they wore while weapons.