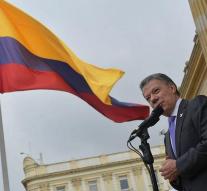 bogota - The Government of Colombia also begin peace talks with the ELN, the smaller of the two guerrilla organizations in the South American country. That, representatives of the two sides on Monday in Venezuela. The negotiations must be conducted in Ecuador.

President Juan Manuel Santos argued earlier successful peace negotiations with the FARC. He last week was awarded the Nobel Peace Prize for, despite the narrow rejection of the agreement in a referendum.

The ELN (National Liberation Army) has pursued fifty years of war against the Colombian government. The movement founded by radical Catholic priests was inspired by the Cuban revolution.

Since January 2014 led the government and the ELN exploratory talks behind closed doors. Meanwhile, it was estimated 2,000 fighters constituent ELN continued with kidnappings and bombings of oil facilities. How many hostages the group now has not known in its power.

The Colombian government and the ELN held even though peace talks, which yielded nothing between 2002 and 2007.

Peace with the FARC and the ELN is probably no end to all violence in Colombia, which also suffers from drug trafficking and other crimes. It does, however, possible areas of the economic development which would not otherwise be accessible. The army can then be used to combat criminal gangs.