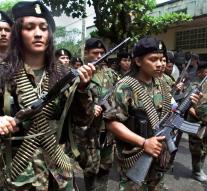 - Residents of Colombia could vote on the proposed final peace accord between the Colombian government and FARC rebel movement. Which have been partially agreed. If there is a final deal, the government submits the agreement to the people. " So that the people can say whether it is for or against the agreement," said Colombian President Juan Manuel Santos Thursday.

Expected to put the government and the FARC by March signed a peace agreement. The referendum will come in May or June. " If the population rejects the agreement, then we will accept that and the war will go on for another 20 or 30 years ", Santos said.

The conflict between the FARC and the Colombian army takes decades and certainly 220. 000 deaths.