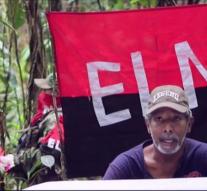 bogota - The government of Colombia has suspended peace talks with the small Marxist guerrilla movement ELN. The group must first release Odin Sanchez, a politician who is held hostage since six months.

President Juan Manuel Santos reiterated Thursday the condition he set a few months ago. The peace talks with the ELN would begin Thursday formally in Ecuador, but was postponed at the last. If the ELN Sanchez let go, the government still wants to Friday or Saturday with the rebels to the table.

The approximately 2,000-strong ELN is the smaller of the two leftist guerrilla movements in Colombia. The government earlier signed a peace agreement with the larger FARC. Santos earned him the Nobel Peace Prize, although the population has rejected the agreement narrowly because the rebels too easily would come off.