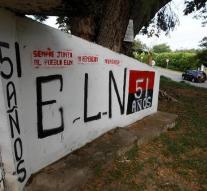 bogota - The Colombian army has one rebel slain in a military operation against the ELN guerrillas and captured four rebels. This was announced by the military. The BBC reports that 24 rebels surrendered and were willing to lay down their arms.

Soldiers attacked a camp of rebels in the northeastern province of Casanare. The offensive comes ten days before the peace talks between the Colombian government and ELN will begin in neighboring Ecuador on 27 October. There are no indications that both parties up to that date will be transferred to a cease-fire.

The ELN after the FARC, the largest rebel group in Colombia. It carries over fifty years of war against the Colombian government. The FARC President Santos recently closed a peace agreement. Although yielded him the Nobel Peace Prize, the Colombians rejected the agreement in a referendum.