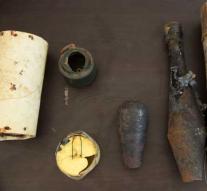 bogota - The ELN rebels are, according to the Colombian authorities, behind recent attacks on police stations. The explosions caused seven deaths last weekend. Dozens of people were also injured.

Most victims fell on Saturday in an explosion in port city Barranquilla. Five policemen were killed and more than forty people suffered injuries. Later attacks in the province of Bolívar and the city of Soledad followed.

Minister Luis Carlos Villegas (Defense) said on the radio on Monday that the so-called National Liberation Army (ELN) is responsible for these terrible deeds. 'According to the minister, that raises the question of whether the rebels are prepared to make peace.

The rebels and the government made an armistice in October, but that file expired earlier this month. Then the violence flared up again. ELN said on Monday that it was a proponent of a new cease-fire, but in the meantime did not let the weapons rest.