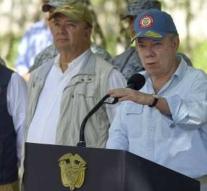 bogota - Venezuelans are increasingly involved in attacks by ELN rebels in Colombia. That said the Colombian minister Luis Carlos Villegas (Defense), who is going to consult with his Venezuelan counterpart Vladimir Padrino about the security measures on the more than 2200 kilometers long border.

Villegas was referring to an attack in which six officers were killed last month and dozens of people were injured. The Colombian intelligence services concluded, according to the Minister, that the attack was planned in Venezuela. He also said that two Venezuelan ELN members died last weekend when an explosive went off with which they wanted to blow up a section of a motorway.

'The number of Venezuelans participating in this type of ELN action is increasing,' the minister warned, who also stated that Venezuelans are increasingly involved in crimes in his country. Venezuela is in a deep crisis. Many thousands of Venezuelans have therefore fled abroad.