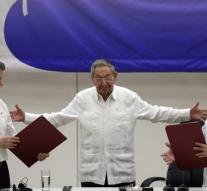 cartagena - Colombian President Juan Manuel Santos and the leader of the FARC, Rodrigo Londono, Monday signed a historic peace agreement. If the Colombian population that chord a half weeks later approve by referendum, will bring an end to a war that has lasted and took the lives of 220,000 people half a century.

The agreement is the result of negotiations in the Cuban capital Havana, which lasted four years. When signing in the Colombian coastal city of Cartagena are also the Secretary General of the United Nations Ban Ki-moon and US Secretary of State John Kerry present. His colleague Bert Koenders represents the Netherlands. Our country has played a facilitating role in the negotiations.

The FARC was founded in 1964 at the beginning of the Colombian civil war and ruled at its peak in 2005, about 10 to 15 percent of the Colombian territory. The group hit in the eighties involved in drug trafficking and pulled out a large part of its income from kidnappings of landowners and politicians. The most famous kidnapping was that of the French-Colombian Ingrid Betancourt in 2002. The presidential candidate was freed after six years by the Colombian army.

If the Colombians on 2 October to join the agreement, the estimated 7,000 guerrillas are housed in UN Special camps and disarmed. According to the deal they do not have to answer legally for their crimes and they get help to tackle again in civilian life. The FARC claims to have no money to pay for it, although the Colombian population is convinced that the rebels hundreds of millions have earned the drug trade.

The Dutch Tanja Nijmeijer joined in 2002 by FARC and was involved in the negotiations in Havana. It is not known whether Monday witnessing the signing of what happens next to her.