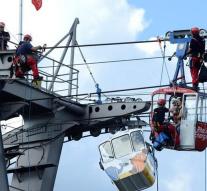 cologne - The crash of the cable car across the Rhine in Cologne still puzzles the experts. It is clear, however, that an auxiliary cable, intended for assembly work, suddenly slipped down a 3.5 meter and remained stuck on a cabin. That led to an emergency stop and a spectacular rescue operation.

'How this thread could get tangled is a big question. We have no explanation for that yet, 'said a Keuls Transport Company (CCB) executive on Monday. Indications that the wind has played a decisive role are not, according to him. The measured wind speeds did not reach the set safety limit on Sunday.

Aid workers had to release 65 people from their distressed position. A large part of the 32 gondolas hung above the water. Specialists from the fire department allowed the injured passengers to rope in a boat on the river pockets. Personal accidents did not occur.

The cableway will only be taken into service if the cause of the incident is known. This includes an independent research agency.