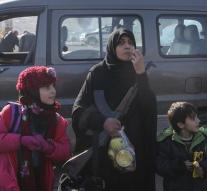 amman - Millions of children in the Middle East which had already difficult, are now also threatened by unusually low temperatures. Certainly families from Syria and Iraq staying in refugee camps in the region are in the cold, warns Unicef.

The UN children's organization has put a major operation launched to provide 2.5 million children ' winter relief '' of warm clothes to blankets and financial support. This is sorely needed, because the conditions in the crisis area are exceptional winters. In the shot-Aleppo approaches the temperature eg freezing.

For children who are already weakened by malnutrition and lack of medical care, the risks are extra large, according to UNICEF. Hypothermia and respiratory infections lurk.

To pay the aid, UNICEF needs to own an estimated $ 82 million. The organization is currently 36.5 million deficit.