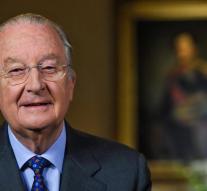 brussels - King Albert, the Belgian throne in 2013 ceded to his son Philip, annually goes wrong half a million to retire. The then Prime Minister Elio Di Rupo had the 82-year-old former monarch promised at that time 1.4 million euros, but Deputy Prime Minister Alexander De Croo disagreed. It remained at 923 000 euros.

The socialist Di Rupo said on the radio that he thought Albert was entitled to a similar amount when Queen Beatrix, but met with opposition from the liberal coalition partner.,, That was nearly a hundred times the average pension of an ordinary Belgians, at a time when the government '' the population to early efforts, De Croo explained his opposition to at Het Laatste Nieuws.

As in the Netherlands, it is very unusual that politicians are out of school about the fate of the monarchy.