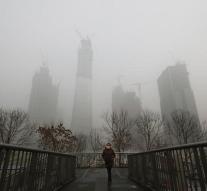 beijing - On Tuesday there is another code red issued in China because of a heavy cloud of smog that hangs over the north of China. It is the fourth day in a row very bad place to be in that environment. According to the Ministry of Health rags many companies stringent environmental regulations on their boot and not to produce less, while it were enforced by the government.

The smog many planes can not take off or land, so flights are canceled.

The smog is poisonous and can be dangerous to health. Smog is composed of particulate matter. Code Red is an alert starting as there is so much fine dust in the air that people can die out.

Air pollution is increasingly common in the northern industrial center of China and especially in the winter when energy demand is highest. Energy is often generated by coal-fired plants.