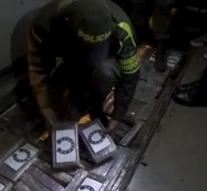 bogota - Two coaches with football fans from Colombia are used to shirring hundreds of kilos of cocaine. Police discovered the hard drugs near the border with neighboring Ecuador.

The fans were traveling en route to Chile for a World Cup qualifier in Santiago. During an inspection it was discovered some 575 kilos of cocaine, according to a police spokesman. The hard drugs were hidden in a space under the floor of the bus and under the seats of the drivers, who were arrested.