Home / World / Cobyn asks May to step up 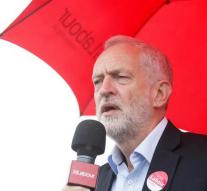 In an interview on the British television channel ITV, he criticized the cuts in the police. He says that May is in no way responsible for the attack on London Bridge.

'They killed cool-blooded people in a disgusting and terrible way,' Corbyn responded as to whether he may 'be responsible in any way' for the attack.

'But the government has been warned repeatedly for the troubles in the number of police officers,' continues Corbyn.

Then Corbyn will ask if he wants May to resign. He said that Thursday's elections might be the best way to deal with it.