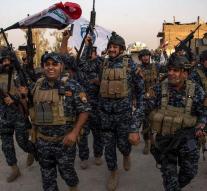 erbil - The international coalition against Islamic State responded monday to the revival of Mosul. 'Although still parts of the Old City need to be stripped of explosives and potentially hidden IS fighters, the Iraqi security forces Mosul now have firm hands,' concluded the coalition in a statement.

Iraqi Prime Minister Haider Al-Abadi held a victory in the second city of Iraq on Monday, where the 2014 terrorist organization declared the caliphate. He thanked his troops and the coalition for their efforts, but warned that much work has yet to be done.

'There is a new mission for us: to create stability, rebuild, and dismantle Daesh's (IS) cells,' said Abadi, who was surrounded by senior soldiers. 'This requires an effort in terms of information and security. And the unity that has enabled us to fight Daesh. '

The battle for Mosul lasted for months. An approximately 100,000 man-made coalition of Iraqi army units, Kurdish warriors and Shiite militia opened in October last year the attack on IS positions in the city. They received air support from the US-led coalition.