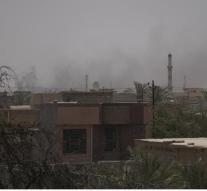 - The international coalition led by the United States has destroyed during air raids over two hundred vehicles Islamic State. The warplanes attacked two large convoys of IS near the Iraqi city of Falluja on.

The attacks are a support for the Iraqi army, which is trying to defend the region from attack by the terrorists, the White House in Washington announced Thursday it.

The convoys were seen Wednesday by coalition aircraft. The attack was opened almost immediately. The first destroyed 150 vehicles in a convoy, a second attack on another convoy managed again to turn off fifty vehicles.