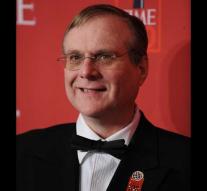 seattle - Co-founder of Microsoft Paul Allen is seriously ill again. He is being treated for lymphoma, he said on Monday.

All suffers from Non-Hodgkin's lymphoma, the same disease that was also diagnosed in 2009. In a short statement, he says that he recently learned that the disease has returned. 'A lot has happened in medicine since I overcame this disease in 2009,' writes Allen, who says he and the doctors are optimistic about the treatments he gets.