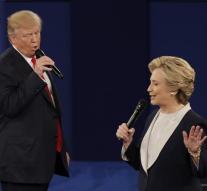 - Viewers of the third presidential debate in the United States Hillary Clinton declared the winner. CNN reported on the basis of a quick poll among viewers. Even after the two previous debates, Clinton came in similar polls as the winner.

CNN emphasized that the group of viewers were interviewed whose opinion contains slightly more Democrats than with a conventional poll. The margin for Clinton this time was smaller: 52 percent chose her, 39 percent felt that Trump was the best dividends. In the second debate, Clinton still scored 57 percent, and after the first debate even 62 percent.

CNN asked viewers which of the two candidates is best suited to be president. This question Clinton also scored better with 59 percent of the vote, compared to 35 percent for Trump.