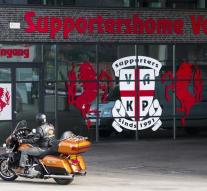 almelo - The mayor of Enschede has abused his power at the closing of the supporter's home in FC Twente's stadium. That was what the lawyer of the Supporters Association of P P claims in a brief case.

The association wants to enforce by court that the supportershome may open during the home match this weekend. Lawyer Umut Ural believes that several people in the supportershome had drugs with them. The police added that amounts to over 11 grams of coke and concluded that there was drug trafficking. That's not the case, says the counselor. The police recognized various people who would deal. Why are not those persons caught but the supporters' union wanted to know the lawyer. The association lacks a lot of income through the closure, with the result that its survival is at stake.

The police already received signals from drug trafficking in the supporter's home in February 2015, said police chief Arjan Derksen. The drugs found were found in commercial packaging. A report in response to the April invasion revealed that the stands of the supportershome could all come up with weapons, adding to weapons. But it also turned out that drugs were being traded on the toilets and on the stadiums in the stadium.

The ruling of the administrative court is due no later than Friday afternoon.