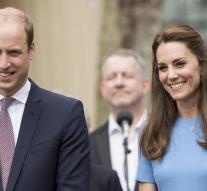 - A judge in the French city of Nanterre has found guilty six people responsible for the publication of topless photos by British duchess Catherine guilty of violation of French privacy legislation. They were fined a total of 90,000 euros.

In addition, the injured parties must pay a total of more than 100,000 euros to Prince William and his wife. The photos appeared in September 2012 in French Gossip Sheet Closer. The convicted are among others two photographers, the responsible editor and the Italian publisher of the magazine. Various other media at home and abroad took over the pictures.

William and Catherine immediately reported to the French magazine. They soon won the first battle five years ago when the judge in Nanterre forbade further distribution of the photographs and instructed Closer to hand over all the images to the couple.

The photos were made when Kate was sunbathing on a balcony of a private home in southern France.