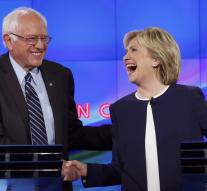 - Hillary Clinton last night unscathed got through the first debate of the Democrats. Previously it was thought that the Democrat who leads in most polls, it would get tough. Including by email scandal that continues to haunt her but.

But please note its main opponent, Bernie Sanders, helped her out of the fire. The 74-year-old socialist senator from Vermont called on stage at CNN that it once had to be finished with the attacks on the emails of Clinton, who during her time as Minister of Foreign Affairs state affairs with her private mail fielded.

The remarks of Sanders could count on applause in the hall of the Wynn hotel-casino in Las Vegas where especially many Clinton supporters had gathered. Yet Clinton is certainly not from the scandal. In little more than a week, she must appear at a hearing to explain himself.

The 67-year-old Clinton appeared during the debate the best prepared. She had the debate beforehand extensively practiced what was paid. Also, she managed the sometimes chilly image to shake off. Besides Sanders and Clinton were still three Democratic candidates, Jim Webb, Martin O'Malley and Lincoln Chafee appear on stage. But they barely played a significant role. Webb, former senator for Virginia, asked several times desperate to talk more. However, the focus was to Sanders and Clinton.

Sanders was tackled as hard on his gun control positions. In his home state of Vermont hunting is popular and Sanders seems to be less strict on gun ownership than the other candidates, earning him criticism came to be, including Clinton.