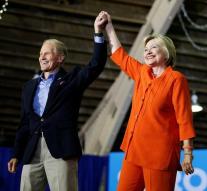 - Hillary Clinton and her husband Bill in 2015 earned more than $ 10 million and taking over 34 per cent tax paid. This is evident from the tax information of the Clintons who made public Friday the Democratic presidential candidate.

Releasing tax information by US presidential candidates has been a tradition for decades. The Clintons, who perform all public offices for decades, his tax information known since 1977. In 2015 Bill Clinton earned as speaker nearly 5.3 million dollars. Hillary Clinton received $ 3 million for her book about her time as Foreign Minister.