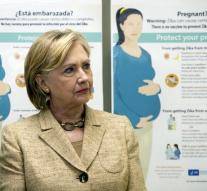 - US presidential candidate Hillary Clinton has called on MPs in her country to interrupt their summer break. She wants them to return to Washington to vote on a bill yet, that money frees to combat the zikavirus. Clinton made her appeal Tuesday after she had visited a hospital in Miami in the US state of Florida.

Florida is the first state where the zikavirus locally transmitted. Earlier infections were only incurred abroad. Clinton hopes that converted 1 billion could be freed to fight the virus.

The zikavirus is probably especially dangerous for unborn babies. They may get microcephaly, a condition that leads to a too small skull and lagging development of the brains. Brazilian scientists, however, not exclude that the virus leads to more problems, which may only become apparent later in life.